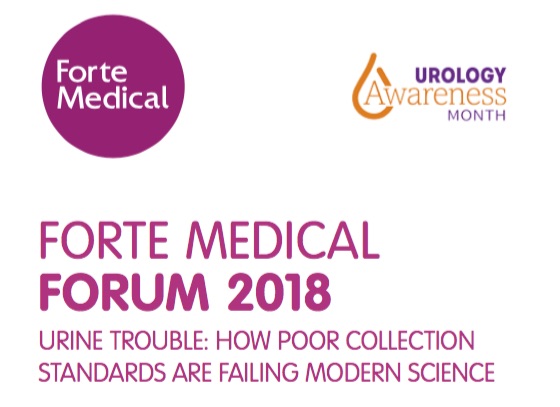 ’Rubbish In, Rubbish Out’; if you don’t make the effort to collect the specimen properly, all the clever stuff that is done in the laboratories makes it pretty pointless.” – Dr Mark Wilks, Clinical Scientist and Prinicipal Microbiologist, Barts Health NHS Trust

This was one of a number of key messages from this year’s Forum and one that resonated throughout the various discussions around the role of urine in healthcare as a diagnostic element.

Scroll down for the full summary or click here

Date for diary – the next Forte Medical Forum is:  Wednesday, 18th September 2019.

Our third Forum entitled Urine Trouble : How Poor Collection Standards Are Failing Modern Medicine proved another insightful opportunity to discuss and debate the inadequacies of specimen collection as well as celebrate areas where progress is being made and highlight how much more can be done to improve this overlooked and maligned area of basic healthcare.

If there is anything that you would like further information about, please do email us.

Urine Trouble: Sample Collection
Dr Mark Wilks, Clinical Scientist and Principal Microbiologist, Barts Health NHS Trust summed this up in one phrase “’Rubbish In, Rubbish Out’; if you don’t make the effort to collect the specimen properly, all the clever stuff that is done in the laboratories makes it pretty pointless.”

The quality of urine samples is not fit for purpose and the way they are collected is unreliable.  We know that 65 million samples are collected every year of which 1 in 4 will be contaminated; that’s 59,000 patients every day not being correctly diagnosed and treated.

Each London laboratory takes 500,000-600,000 urine specimens every year but he said this could vary either way by a 100,000.  Analysis is automated and there is a need for a catch all algorithm to decide if the urine should be cultured and rules are also needed for interpreting results which may or may not be modified depending on number of white blood cells and the patient group.

EH Kass said in 1965 that urine should not be left at room temperature for more than an hour as bugs will increase and make the sample unreliable.  The reality is that samples might sit in a surgery, ward or clinic for a number of hours before being picked up for transportation to the lab.  Conversely blood is booked into the system immediately and sent for analysis.

The path to change is challenging and beset with problems but more of that later.

Urine Trouble: Focus on Ante-Natal and Clinical Evidence For Change
There is much angst about antenatal urines.  Dr Nina Wilson, a Sussex based GP and Chair of the Petals charity, spoke about the health system’s dependency on antibiotics working and the life enhancing operations and preventative surgery that may not happen

UTIs, often considered run of the mill within primary care, are common in pregnancy.  Lower tract infections affect 1-4% of pregnancy with higher tract infections about half that.  In pregnancy there are more serious consequences for both the mother and baby.  Kidney infection can lead to sepsis and there is greater risk of prematurity and increased mortality.

Once, pre-antibiotic maternal deaths from sepsis were 3 in a 100; today it’s fewer than 3 in a 100,000 but with increased AMR the question sits as to whether this will be the same in the future.    It relates to back to Jim O’Neill’s Review on Antimicrobial Resistance pointing to potentially 10 million deaths attributable to AMR by 2050.

The issues around antenatal urines, the way they are collected and the emotional effect on expectant mothers, was something that Sylvia Bone, Clinical Lead Midwife confronted when she joined West Hertfordshire Hospitals NHS Trust.    She found that numerous urine samples were being sent unnecessarily to the laboratory on a daily basis; that patients were being prescribed unnecessary antibiotics for mixed growth and 90% of the results were No Abnormalities Detected (NAD) with many false positive results.

She conducted a trial using the Peezy Midstream with 647 women in the antenatal clinic and found it delivered almost 70% reduction of false-positive urine specimens, leading to far lower unnecessary antibiotic prescribing as well as more personalised clinical care – and much happier patients – as well as substantial financial savings for the Trust.   There is a way forward where there are open-minded individuals such as Sylvia.

Urine Trouble : The Technology Adoption Battle
“Innovation is about team work – it cannot be considered in isolation” – was the message from Piers Ricketts, Chief Executive of the Eastern Academic Health Science Network (EAHSN), one of 15 in the network tasked by NHS England to oversee the introduction of new technology into the NHS.  The UK is blessed with great innovators and researcher but the bureaucracy and infrastructure of the NHS makes it one of the most difficult organisations for innovation to infiltrate.   Change is needed, along with appropriate funding, to get technology adopted and spread across the system.   The adoption pathway needs improvement and one suggestion Ricketts made was for the introduction of Directors of Innovations for each NHS Trust.

He concluded “Change has to come from the front line.   The biggest asset the NHS has is its people and for adoption and spread of innovation we need ‘boots on the ground’.”

Urine Trouble: Changing Mindsets and Instilling Knowledge
“I didn’t’t realise the importance of urine until now … we’re not told about it” said a medical student in the audience.    This misconception of urine just being a waste material and not having the parity of blood was reinforced by Louise de Winter’s presentation and The Urology Foundation’s survey for Urology Awareness Month.  (More detail here.)
Of the 1,000 people interviewed:

Astoundingly the research highlighted that whilst the NHS talks about 6 million people suffering from urinary incontinence; it could be nearer the 20 million mark.

UTIs are the most common urological problem with just under 40% of the population having suffered from one.   14% of men and 20% of women had missed work because of a UTI – in men that’s 1 in 7 which in turn has an impact on productivity alongside the impact on their mental health and wellbeing.

Alison Pearce from CUTIC – a patient advocacy group – told of stories where patients have to go to the toilet every ten minutes, are unable to sleep at night, are unable to work, are unable to have a sex life and in some cases unable to leave their home, and children unable to go to school.   UTIs “totally ruins lives; people are unable to live a normal life – and the suicide rate is high within this patient group so we desperately need better testing and better treatment” she said.

“This means better urine collection from the point of collecting the urine at the GP surgery,  storing and transportation and better accurate testing when it reaches the laboratories.”

“Why We’re Looking For Cancer Clues In Urine”